The Hopefully Not Forgotten Bob

So, where to start?

We still haven't been able to move. Life has been one big nose to the grindstone in the form of going back to a day job for the past year and a half now with very little to show for it other than NOT BEING HOMELESS. Not that our home is worth calling a home. I'm really not going to just moan and bitch for this entire post. Just bear with me as it's been a rough year and I may need to go off on a raving tangent here and there without warning. You've been warned? 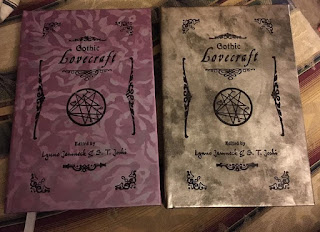 Some good things have also happened and are happening. Most of them have been or are a (glacially) long time coming, but they've happened/are happening nonetheless. There was the release, in December of last year, of GOTHIC LOVECRAFT edited by Lynne Jamneck and S.T. Joshi and including my short story "Four Arches" a Lovecraftian twist on my hometown's version of the goatman rural/suburban legend. For those of you who don't already know, this book has been in the works for some time. I believe it was initially supposed to be released in late 2015 if I'm remembering correctly. 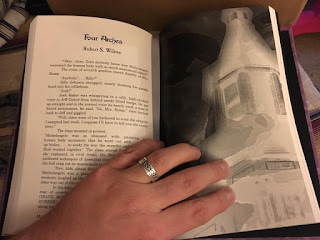 This handsome volume is available, at least for now, in only two hardcover editions from Cycatrix Press (pictured above the previous paragraph, there is a trade edition and a signed/lettered limited trade edition) and as an Amazon Kindle eBook.

I'm quite pleased to be sharing pages with several authors I quite look up to in this collection, including Caitlin R. Kiernan and John Shirley. 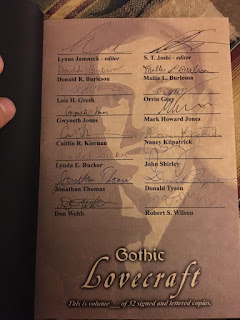 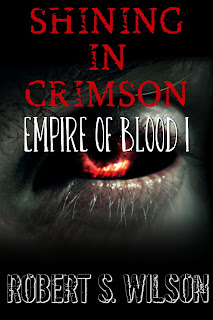 On September 6th of last year, SHINING IN CRIMSON's eBook edition celebrated its fifth birthday alone in the corner of an empty room with a used paper plate coned into a birthday hat on its proverbial head... I had intended to have a revised, expanded, and author's preferred edition ready for release on the fifth anniversary of its October paperback release, but alas the nose to the grindstone thing and the obligations of family life have kept me from managing to accomplish this even still. Maybe I'll have it done by the time the tenth year anniversary comes around? Ha! I'll try not to take that long.

Speaking of trying and utterly failing, some of you may remember a collection of Empire of Blood origin novellas I promised to have out some time ago called ORIGINS OF BLOOD. I had initially offered a preorder for it only as a limited hardcover, but seeing as how 99.9% of my audience are Kindle users, it was only ordered by a handful of people and I didn't manage to raise enough funds to cover the cost of putting it together. That said, I agreed to provide special copies to those folks nonetheless while also getting their permission due to the low demand in print of putting out an eBook edition as well. And I still as of yet haven't delivered on that and for that I'm more sorry than I can say. 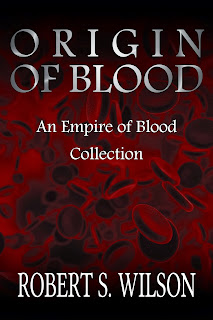 The book has proven to be an elusive one for me to finish and while that's no excuse for its extremely tardy delay, I do hope those of you who preordered understand given how little time I've had to write at all the past two years or so. And while I'm throwing out excuse after excuse, there was also a number of months in which I wrote nothing at all because I found myself in that old stupid cliche of writer's block. Had you told me prior to that that such a thing existed I would have laughed in your face. But it happened and I felt myself unable to break free from it until inspired by just the right pair of stories.

All that said, I'm still working on ORIGINS OF BLOOD and I hope to have it finally, once and for all, ready to release before the end of this year!

On the editing front, I'm no longer taking new clients due to the whole day job thing, however, I am back in the anthology game. Last year, I solicited a number of authors whose work I love to contribute to a new cosmic horror/noir anthology for Crystal Lake Publishing titled ASHES AND ENTROPY. So far I've accepted only two stories for it but I should be receiving many more stories soon. Look forward to that one to come out sometime next year!

For those who don't know, Nightscape Press remains currently on hiatus awaiting the launch of our new charity publishing model we've been working hard on for some time now. The idea is that authors and the charity of their choice will receive most of the royalties while NSP will get a meager little bit and then mostly rely on donations/pledges/special projects to cover our expenses etc.

We've enjoyed doing the "For Good" line of charity anthologies (Horror for Good, Fantasy for Good, with more to come!) and have always wanted to expand on our charity work. Hence the idea to become the first ever (that we know of) charity-driven speculative fiction press. Unfortunately, though, things are moving slow as we still have a couple of books to put out via the old model, but we hope to open submissions later this year for the charity model when we relaunch.

I have a long overdue story yet to come out at some point this year... if it does. I hate to say that, but it was initially slated for a late 2013 release and well... it's been quite a while now. That said, I'm told it should be coming out soon. The story, "Coma," marks a rare departure for me from either horror or more concept-based science fiction. It focuses on the torn relationship between a married couple in the midst of a coming apocalyptic impact from a comet. I'll try and remember to update the blog when it comes out.

Alongside ORIGINS OF BLOOD, I've also been working on a number of other stories, mostly science fiction and/or weird cosmic horror and/or both mixed together. I finished a noir-ish science fiction novella titled Dream Static last year in order to submit it to Tor.com's call for near-future SF novellas last summer. However, upon receiving the feedback of some gracious and inspiring writer friends, I realized it wasn't ready and in the midst of reworking it, I didn't quite make the window for that submission call. I've since not figured out exactly what to do with it. I would prefer to publish it the old fashioned way instead of self-publishing, but we'll see what happens. 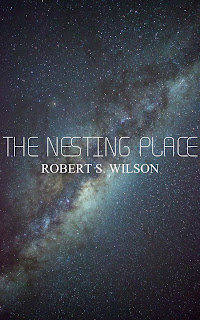 One last thing before I wrap this post up: I'm currently going over and marking edit points for the audiobook edition of my 2014 hard science fiction novella THE NESTING PLACE. Scott F. Feighner, under the name Scott McDonald, has done a phenomenal job at bringing my story to life in audio. Look for this to be out very very soon!

Beyond that, I'm sure there are tons of things I'm forgetting to mention since the last time I posted was December and that was maybe one of three or four posts last year... but at the moment, I think this will do. It is what it is. Thank you for having patience with me or maybe even for not forgetting I exist!

Until next time...
Posted by robertswilson at 11:27 PM