There's now only 4 days left of the Kickstarter for Fading in Darkness: Empire of Blood Book Two and The Rise of Caesar: An Empire of Blood Novella. I'm still rather far off from my goal, so if it sounds at all interesting any dollar amount pledged would be a big help. Since my last post I've added a $10 option as well. In case it doesn't get funded I have a contingency plan for the limited edition novella to still get produced and along with it other perks could be acquired. But it would mean that it would likely take me longer to get these things done.

Along with that news, I should mention that Shining in Crimson: Empire of Blood Book One is FREE for Kindle today (Sunday May 27th 2012) for those who come across the Kickstarter and do not know about the series and are interested in giving it a try (and of course anyone else who would like to give it a read).

So just in case you couldn't find the link to the Kickstarter in the last post...

Here's a link for you thats REALLY REALLY BIG just in case you didn't see it last time ;-)

And in case you missed the last post, here's a recap of what the Kickstarter's about:

Fading in Darkness: Empire of Blood Book Two and more...

In this second installment in the Empire of Blood series, Hank Evans is headed back to Necropolis, but this time he won't be running for his life...or will he?

Tensions between the American Empire and the vampires of Necropolis have risen to an all time high. With the Emperor threatening Toby's life, Hank's new position as the mediator has just been unofficially upgraded to Imperial spy. But his internal thirst for revenge and newfound sense of purpose can't stay hidden forever.

Hank must now find a way to release the hold the Emperor has over him in order to fight back. But an unexpected struggle will put him at odds with who he really is and who he has yet to truly become.

By donating to this project you get the opportunity to receive an early ebook copy of the upcoming novel, Fading in Darkness: Empire of Blood Book Two as well as the choice of some special prizes including an exclusive limited edition hardcover novella and interactive placement in the story itself. Or you can even have an Empire of Blood story written and bound just for you.

For a sneak peek at chapter one go to: http://shiningincrimson.blogspot.com/2012/03/fading-in-darkness-empire-of-blood-book.html

For those who haven't heard of the series the Kindle version of the first book, Shining in Crimson, will be FREE to download on Amazon.com for 3 days during this Kickstarter (Friday through Sunday: May 25th, 26th, and 27th). You can find the book here: http://www.amazon.com/Shining-Crimson-Dystopian-Vampire-ebook/dp/B005LD2TKK as well as a free Empire of Blood short story here: http://www.amazon.com/Happens-Vegas-Dystopian-Vampire-ebook/dp/B0060LYGV2

Praise for Shining in Crimson: Empire of Blood Book One:

"One of the best surprises I've had in a long while. Writing with a smart, self-assured ease, Robert S. Wilson has given us a gift with Shining in Crimson. Part Underworld, part Escape From New York, Shining in Crimson is genuinely frightening, genuinely thrilling, but above all, first-rate storytelling. I'm a Robert S. Wilson fan from now on!"--Joe McKinney, Bram Stoker Award-winning author of Flesh Eaters and Apocalypse of the Dead
"A big-scale vampire thriller that changes the rules."--Scott Nicholson, bestselling Kindle author of Liquid Fear, The Red Church, and They Hunger
"Robert S. Wilson shows a lot of promise here with this debut novel. Now it's time to see where that promise will take him."--Ray Wallace, The Chiaroscuro

"You'll not find some glistening torsos and smouldering eyes in this book. What you will find is a brilliantly thought out society of Vampires."--Jim Mcleod, Ginger Nuts of Horror

"The Mesh of Religious symbolism and political commentary tucked neatly between pure horror and suspense is superb."--Lisa Lane, The Cerebral Writer

"With well-fleshed characters, multiple storylines and a vampire history that makes sense, Shining in Crimson: (Empire of Blood #1) is a well-written horror novel. I am anticipating the second and third books in the series."--Trembles Horror Magazine
All time frames for perks listed are the latest estimation of when they will be received and may be ready sooner.

The money raised from this Kickstarter will go to paying for editing, artwork, and production of both the novel, Fading in Darkness, and the novella, The Rise of Caesar.

Posted by robertswilson at 2:28 AM No comments: 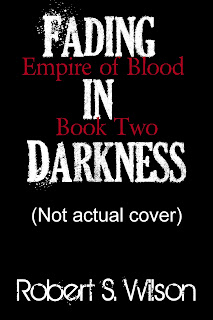 
Posted by robertswilson at 7:29 AM 2 comments: