I present to you a guest post from my partner in crime at Nightscape Press: Mark C Scioneaux 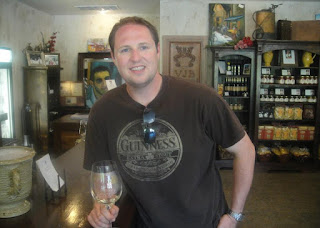 On Hollow Shell and why the Zombie Genre is Coming Back from the Dead
By: Mark C. Scioneaux


I cannot speak for all horror writers, but I think the first subject an aspiring writer tries to tackle is the zombie novel. There are a few reasons why the zombies are the popular choice, but mostly I believe it is due to the simplicity of the subject, and the way the story develops.

First, you have undead monsters. Scary, right? There is nothing more horrifying and heartbreaking than the thought of your mom, dad, sibling, child, etc. coming for you with no remembrance of who you were to them. All you are now is a meal. Second, it lets the writer craft a tale of survival, and doing what it takes to persevere during trying times of the walking dead. Third, and lastly, the aspiring writer can make a choice of where they want their novel to go. Gratuitous amounts of sex and gore? A cast of characters, ranging from your basic stereotypes to original and unlikely heroes? The writer is free to do what they want, for the world has ended and they are at the control panel. Writers are free to carve their own paths, and zombies help pave the way.

Why am I rambling about this? A few weeks ago, I received an email from a publisher. He was cancelling an anthology of which a story of mine had been submitted. His reasons were honest and understandable, but one didn’t sit well with me. He said the genre was flooded with bad zombie books. He wouldn’t make any return on his investment for the anthology he’d planned. The zombie genre was dead; a bullet put right between the eyes of the literary ghoul. To a point, I agreed. With the surge of self-publishing, it appears any and all aspiring authors, who don’t venture through traditional publishing venues for their work, have a zombie novel uploaded to Kindle. I’ve read more than my fair share. Some are great. Plenty are bad, often filled with poor editing and even worse writing. With the popularity of The Walking Dead leading the way, zombies have infiltrated every aspect of our pop culture. The public is burnt out, and who can really blame them? But I think they can be saved and restored back to the prominence and respect they deserve. It is my hope that my serial, Hollow Shell, assists in the revival of the zombie book.

When you start Hollow Shell, you’ll see I jammed my foot on the gas, and very rarely do I let up. The tale centers around one central character, Chris. He isn’t special, really; just an ordinary guy trying to do the right thing. He’s not a super soldier, or someone who can make headshots while sprinting through a field. He’s you. He’s me. I wanted to make him that way so you, the reader, would feel for him, think like him, and ultimately place yourself in his situation and contemplate over the choices you’d make if you were in his shoes. There is another character, Dawn, who joins Chris on a most epic journey. I won’t spoil it for you where they are going, or why, but it will be something pivotal that drives our main character forward, much to the dismay of the young woman accompanying him.

Chris and Dawn make a good pair, and I think they represent real people in a tragic situation. There is tension, violence, sex, and gore; all things one expects to happen when the laws and rules of society have been thrown out the window, but it’s kept in check. It’s balanced. It’s real. When I write, I try to put myself in my character’s shoes. How would I react? What would I say? How would I get out of this predicament? The result, I feel, is a story with realistic consequences to actions. I want to show the reader that yes, zombies are scary, but humans are so much worse. There will be times when you cheer for the zombies. Hopefully I’ve written enough moments that make your jaw drop and your fingers fumble your e-reader when you go to turn the page.
I plan to update the series every quarter. It will take time to not only write, but also go through the proper editing and proofreading channels. Self-publishing isn’t a bad thing. As a person who has been traditionally published and is co-owner of Nightscape Press, I feel this is what the Kindle was made for. But the key is you have to give the customer a professional product, and one you’d be happy to put your name on. I hope I have done this for you, the reader.

Hollow Shell is violent and tragic. It also has moments of humor and raw emotion. It is charged with a certain tension that I feel would exist in a situation like the one our two characters are thrust into. What I love the most about zombie literature isn’t so much the zombies, but the interaction of characters as the world falls apart. There are so many great opportunities for me as a writer to explore the human condition and psyche. That’s what draws me to post-apocalyptic books. The zombies are awesome. They give your characters a reason to act the way they do. But they’re only a part of the story. In Hollow Shell, you’ll care about the characters and realize that these are normal people trying to survive with the zombies as a backdrop. I hope you will keep up with Hollow Shell, because it’s going to be a wild ride. 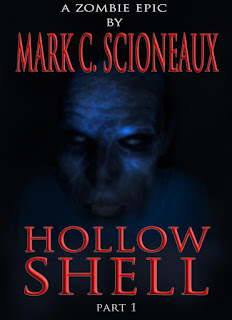 In closing, I’d like to thank Robert Shane Wilson for allowing me to share my thoughts on zombies. I hope you enjoy Hollow Shell and follow the series to the end, whenever that may be. Don’t abandon the zombie story. There are many good ones out there, and like the undead, they are going to just keep coming!

A sample from Hollow Shell: Part 1


“What have I done?” Chris said as he slid down the living room wall.
A faint trail of gray smoke rose from the gun, slowly dissipating into the atmosphere and stinging his running nose. His hands shook uncontrollably, so bad the gun almost fell from his limp grasp.
“Why, God? Jesus…Why?” he gasped, the tears starting to roll down his stubbly face.
With each passing moment, panic at the realization of what he had just done started to settle in. It was a sickening feeling developing deep in the pit of his stomach. He felt a wave of nausea wash over him. He closed his eyes, drew in a deep breath, and let it out slowly.
Why am I calling out to God? he thought, as the idea of asking an all-mighty and benevolent creator for help had proved to be a waste of time. God didn’t seem to be present at the moment he put a bullet right between the eyes of his loving parents and once beautiful sister. Those same eyes that gazed down on him the day he was born. Eyes at one time filled with unconditional love, now glazed over in a pale aqua-blue glow. The look they once bore replaced with an insatiable hunger. Chris couldn’t let them live like that. His sister, so beautiful and caring; so young and full of dreams, had been turned into a deformed creature. There was nothing left of who she once was. The same sister Chris beat up a playground bully for. The same sister whose ice cream cone hit the floor and Chris readily gave her his. The thought of her pain made him tear up and the urge to scream rushed up through his throat like vomit.
She had come toward him with the same look as his parents, those hungry, lifeless eyes. His hand made steady by a surge of adrenalin gave him a brief moment of clarity and precision, though his vision had become blurry with tears. The sound of her moaning and shuffling feet became louder as she moved closer. He aimed, closing his eyes as he pulled the trigger, feeling the hammer kick back and the gun jolt in his hand. The abrupt discharge was followed by a soft thud. He opened his eyes and in that moment came to the sick realization that he was an only child and an orphan. All done by his own hands.
One more bullet left in the chamber, he thought to himself, and that one is going to be for me. The searing heat of the gun singed the inside of his mouth, but he didn’t care. One squeeze and everything would be all right. Just a loud noise, maybe a little pain and his troubles would cease to exist. Or maybe there wouldn’t be any pain at all. It would be a coward’s way out, but given the current events and his decaying mentality, it felt like the right thing to do. He closed his eyes tight as his finger slowly depressed the trigger. Just a little more, he thought. Just do it!

Posted by robertswilson at 10:18 PM No comments: