Some Quick Rising From Ashes Updates

This is just a quick post to throw out some random RFA updates. First of all, RISING FROM ASHES is now available for pre-order on Google Play for you Android fans out there! So far as I know, that was the last missing link as far as eBook distributors go. So, if for some reason you're just now seeing this and you'd rather pre-order RFA in some other format (including signed trade paperback or hardcover directly from me), you'll find all the various purchase links here. And for those who want to get an early start, you can start reading RFA up through part of chapter 13 over on Google Books here!

In other RFA news, I've emailed out the eBook edition to those who "pre-ordered" them via the Empire of Blood Indiegogo campaign way back when. If I've missed someone, please make sure and let me know what your email address is and what your Indiegogo account name is, etc. and I'll get that sorted out asap. The trade paperback and hardcover perks from that campaign will also be going out very soon, so keep an ear out for more on that.

I've also uploaded RISING FROM ASHES into the "RSW For Life" Dropbox folder. Same deal as above, if you purchased the RSWFL folder in the past and you can't access it now for some reason, let me know your email address and the account you purchased it with and I'll get you a new link.

I think that's about it for now, but remember, folks... Tomorrow starts the ten day countdown for the eBook release!!!!! I hope you guys are excited! Because I sure as hell am!

Posted by robertswilson at 2:35 PM No comments:

Okay, so I never do book reviews pretty much ever and of the few I've done in the past, I've never put them up on here, but what the hell. I liked this one a lot and I'd like to share it with the handful of you who still haven't found the secret button to get the hell out of my chamber of freakish horrors. You're welcome. ;-) 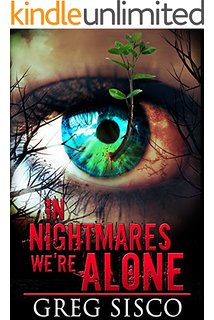 Each nightmare is unique. All nightmares are the same.

Three interwoven tales of terror form a collage of human suffering as three separate victims are plagued by otherworldly horrors. A young girl finds herself stalked by the hypnotic eyes of her mother’s new doll, a womanizing con artist can no longer contain the plants that sprout from his fingernails, and a bitter old woman is haunted by the cryptic messages on her dead father’s typewriter.

Rattling the chains of their separate Hells, these desperate lost souls lash out against the unknown, inadvertently plunging one another deeper into their respective nightmares.

Greg Sisco pulls off an amazing feat with this would-be novel, would-be collection. He takes three powerful horror novellas each from a different first person point of view character and tells one longer interweaving story. At times the story seems chronological until you run into situations from the other tales and realize that, while overall the story isn't just one happenstance from three angles, it's actually three stories that segue into each other like a hand of three Aces waiting to be played.

There are a few scenes where the author shows us the same situation from one of the previous novellas in the collection from another character's point of view and I must admit, typically, I loathe when authors do this, because all too often it's only self-serving and a complete drag on the story. But here, Sisco does it briefly enough and with such powerful character revelation as to execute each of these scenes practically flawless.

Sisco's prose is tightly weaved, engrossing, twisted as hell, at times serious and penetrating, at others darkly hilarious, and even sometimes, he manages to pull off both in an extremely moving and entertaining display of skill. I lost count of how many amazing lines he was able to slip into this book. Some sending me into fits of laughter while others grabbing hold of that existential cord that pulls together wonder and terror.

Fans of one-protagonist/one-viewpoint novels might have a hard time with the three separate viewpoints that make up this story, but I found it to be a fascinating balanced whole regardless. If you're to look at this book as a collection of stories, it has the further treat of each tale standing on its own. However, if you read these in order as I did (or maybe even out of order as well?), you'll likely find yourself unable to put the book down until you've read all three and know the complete story.

My only complaint would be that toward the end of the last story there was a moment when the prose became a tad bit too heavy with character internalization, but the moment is so brief it doesn't warrant me taking off any stars.

I own several other books by Mr. Sisco and have yet to read them. That will be changing soon for sure. It would appear to me after reading In Nightmares We're Alone that Greg Sisco is one of the best kept secrets in modern horror and dark humor. I think it's time we let the proverbial cat out of the bag!

Posted by robertswilson at 7:00 AM No comments:

The Final Cover for RFA is here! 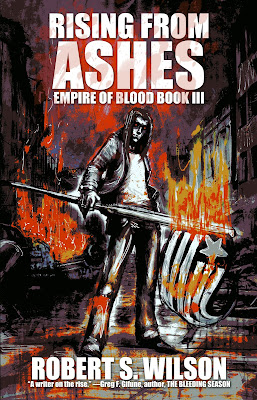 Isn't it so pretty??? Luke Spooner of Carrion House did this one and he'll also be doing new covers for Books I and II as well.

When I first started writing SHINING IN CRIMSON, in about 2008 or 2009, I pictured everything I was writing with a sort of graphic novel/comic book aesthetic, so when I learned that my previous artist would not be able to do RISING FROM ASHES in time for the book's release, I immediately wondered what it would be like to go with that kind of vibe with all new covers.

It just so happens, I had just worked with Luke on the cover and interior artwork for a brand new book from Nightscape Press by K.M. Tonso called DARKLING INCIDENCE: OBSCURE REFLECTIONS.which by coincidence actually hit Amazon today, so if you're looking for a really well-written collection of weird/dark fiction check it out. It's of course, edited by yours truly, and we wouldn't be publishing it if we didn't think it was absolutely amazing. 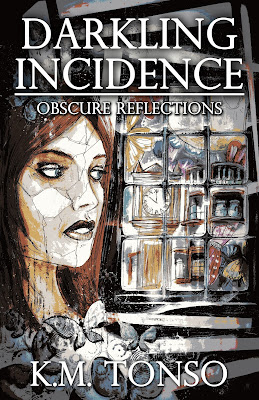 Here's the description for the curious:

Herein are contained reflections of what, as Saint Paul says, we see in a glass darkly. And as this angle of incidence is so shadowed, so must be the reflections it derives.

These sixteen stories provide obscure reflections of worlds much like ours yet different. Worlds that grapple with increasingly confused and distorted realities.

Each reflection so vivid as to become an open doorway where unwary readers might just find themselves stumbling over the threshold... never to return.

And while you're at it, you should also really check out Amelia Mangan's debut novel RELEASE also edited by this guy (thumbs and all) and published by Nightscape Press last month. Some of you may remember Amelia's gorgeous dark morsel of a story The Souls of Stars from the Vampire/Sci-fi anthology I edited back in 2013 called BLOOD TYPE: AN ANTHOLOTY OF VAMPIRE SF ON THE CUTTING EDGE. 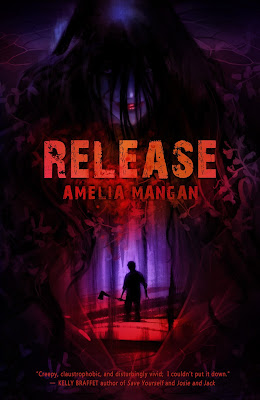 Both of these books are a fantastic treat for anybody who loves dark, gothic, or weird fiction. Amelia's novel leans more toward a gothic psychological sort of anti-romance/thriller. This gorgeous cover art was designed by the ever phenomenal Boden Steiner who did the covers for both THREE MILES PAST and STERLING CITY by Stephen Graham Jones and DAYS OF RAIN by Ray Wallace for Nightscape Press previously. Here's some more about RELEASE:

At the age of sixteen, Stanley Fitzgerald murdered his mother. He hasn't uttered a word since. Institutionalized for the last twelve years, he spends his days numb and unresponsive, shut away in a dismal, silent world of his own.

Until he meets Marina.

As their friendship grows, Marina's influence draws Stanley out of his shell. The doctors, pleased with Stanley's progress, decide it's time for his release.

Returning to the isolated Midwestern farmhouse where he grew up, Stanley is determined to start putting the pieces of his broken life back together. He never believes he will see Marina again. Not as long as he lives.

Until, one black and rainy night, Marina appears on Stanley's doorstep. 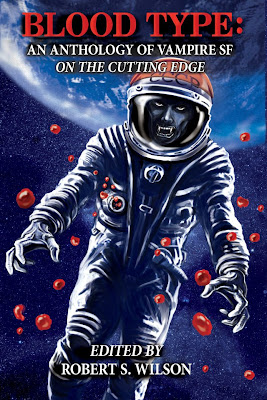 Stanley wants so badly to believe her.

Stanley has no choice but to let her in...

RELEASE is a Gothic fairy tale of love, death, guilt, and madness.

And it will never let you go.

"Reading Amelia Mangan’s Release is like being trapped in a slowly sinking ship while icy water rises all around you. It’s creepy, claustrophobic, and disturbingly vivid; I couldn’t put it down."
—Kelly Braffet, author of Save Yourself and Josie and Jack

"Beautifully written and utterly absorbing, Release is the story of a young man trapped in an insular world of memories and madness. Returning to the rat-infested farmhouse where he grew up, Stanley Fitzgerald settles into a routine. He cooks, he cleans, he listens to the radio. One day fades into the next, but there is a certain comfort in the mundane. A certain hopefulness in the simplicity of his new existence. Then a beguiling young woman shows up at his door and Stanley soon realizes that for a man such as he, there can be only one release.

"Amelia Mangan’s writing is so rich and evocative, the reader will be tempted to race through the pages, but don’t. Release is to be savored, preferably on a moonlit night with a chill in the air."
—Amanda Stevens, author of The Graveyard Queen series

"Haunting and hard to shake off. Release wraps its chilled fingers around you and doesn't let go."
—Kathy Charles, author of John Belushi Is Dead

"Release is the novel you'd get if you put Stephen King and Angela Carter in a room together and got them good and mean drunk. Scary, thrilling, gimlet-eyed, and so sharp you could cut yourself on it, this is a triumph of horror novels, and heralds an exciting new talent in Amelia Mangan."
—Jessica Alcott, author of Even When You Lie To Me
Posted by robertswilson at 1:26 PM No comments:

Bad News, Short Delays, and What Not...

It is with much frustration and stress that I must inform everyone that the release date for RISING FROM ASHES has been moved up to December 8th, 2015. I am very sorry for the delay. I'll have more updates soon.
Posted by robertswilson at 8:27 AM No comments: