Can You Say Preorder??? Here Let Me Say It With You... RISING FROM ASHES! 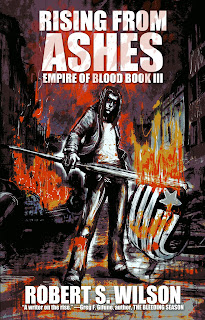 The date is finally set! On Tuesday, November 24th December 8th, 2015, RISING FROM ASHES: EMPIRE OF BLOOD BOOK THREE will hit all the major e-stores! Pre-order is now available for trade paperback and hardcover editions from the Robert S. Wilson Big Cartel store and for eBook editions at all the major eBook chains. Click the icon of your preferred retailer below! I'm so excited to finally share the final Empire of Blood novel with you folks. It's been a long four years since SHINING IN CRIMSON hit physical and electronic bookshelves alike and one hell of a crazy ride! In celebration, you can get RFA for a special eBook pre-order price of only $2.99! Here's the deets:

Now with nothing left to lose, Hank Evans has transformed from a hollow shell to a military leader of the Foederati, hardened to the core with the cold unmerciful steel of revenge. He rightfully blames the Emperor for the death of his son and will stop at nothing to destroy the evil man and his twisted religious empire.

Armed with the knowledge that he alone is the biggest threat to the monster who rules the American Empire, Hank needs only to learn the secret that will allow him to kill this terrible creature who ripped apart so many lives.

But as the vampire Queen's belly grows larger and the time for her to give birth grows near, new visions of the future distract Hank from his plans of vengeance with glimpses of a boy hidden in shadows... A boy who looks so very much like Toby.

And in the end, a new litter of vampires is born and they will change everything.

Posted by robertswilson at 10:36 AM

Email ThisBlogThis!Share to TwitterShare to FacebookShare to Pinterest
Labels: Rising From Ashes