SHINING IN CRIMSON: EMPIRE OF BLOOD BOOK I 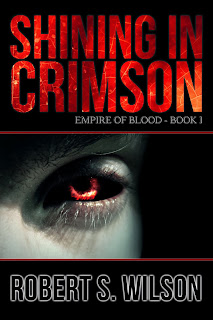 Set in a dystopian, religiously-demented American Empire, the city of Las Vegas is no longer a city of sin. Now called Necropolis, it is a city that eats sin. The vampires of Necropolis wait patiently for the Empire's weekly drop off of guilty Penitents; sinners and criminals full of fresh blood.

Hank Evans is one of those Penitents and he would gladly let the vampires take every drop of his blood if it weren't for one detail: Toby. Toby is Hank's only son. Now, Hank must do whatever it takes to escape the city of the dead and save his son from an Empire as bloodthirsty as the vampires it uses to keep its people in line.

Praise for Shining in Crimson:

"A big-scale vampire thriller that changes the rules."-Scott Nicholson, bestselling Kindle author of Liquid Fear, The Red Church, and They Hunger

"One of the best surprises I've had in a long while. Writing with a smart, self-assured ease, Robert S. Wilson has given us a gift with Shining in Crimson. Part Underworld, part Escape From New York, Shining in Crimson is genuinely frightening, genuinely thrilling, but above all, first-rate storytelling. I'm a Robert S. Wilson fan from now on!"-Joe McKinney, Bram Stoker Award-winning author of Flesh Eaters and Apocalypse of the Dead

"Robert S. Wilson shows a lot of promise here with this debut novel. Now it's time to see where that promise will take him."-Ray Wallace, Chizine

"You'll not find some glistening torsos and smouldering eyes in this book. What you will find is a brilliantly thought out society of Vampires."-Jim Mcleod, Ginger Nuts of Horror

"The Mesh of Religious symbolism and political Lisa Lane, The Cerebral Writer
commentary tucked neatly between pure horror and suspense is superb."-


"With well-fleshed characters, multiple storylines and a vampire history that makes sense, Shining in Crimson: (Empire of Blood #1) is a well-written horror novel. I am anticipating the second and third books in the series."-Trembles Horror Magazine