Happy Holidays, everybody! I figure we're about due (ridiculously overdue?) for one of those chats where I fill you in on all the crazy stuff that's been going on and you--well, you don't really say anything... Unless you comment of course. But yeah, a LOT has happened since I last properly updated the folks out there who are actually (suckers) awesome enough to keep up with all things RSW and the like.

The first thing I've only recently mentioned is that my novella EXIT REALITY was accepted for publication by Blood Bound Books in early October! The book is due out in both Trade Paperback and Kindle editions in early 2013! If you don't know anything about the story why not check out my NEXT BIG THING POST that talks all about it.

The second thing on the docket is an update on BLOOD TYPE: AN ANTHOLOGY OF VAMPIRE SF ON THE CUTTING EDGE: Since I last mentioned the anthology, I have confirmed more authors who will contribute and accepted more stories. The book will include stories from Laird Barron, Tim Waggoner, Stephen Graham Jones, Michael R. Collings, Peter Giglio, H.E. Roulos, and Jason Duke. So, if you haven't already, check out the BLOOD TYPE Indiegogo fundraiser. All monies raised go to pay the authors for contributing and to pay for perks. Speaking of perks, in exchange for donating you can get some really cool stuff depending on how much you give. An early ebook copy, your name listed in the acknowledgements, all of my current and future ebook titles for free for life, a BLOOD TYPE bookmark, a trade paperback copy of the final anthology, a trade paperback copy signed by the editor with bookmarks individually signed by all the authors, and the grand whopper prize: one of the characters within the anthology named after you! So check it out and please, please donate.

And number three on the list: I made my first professional short story sale! My dark science fiction story COMA will be published in an upcoming magazine issue in 2013! More details coming soon.


Number four would be that all of my titles are on sale for the holidays:

Born to Kill: FREE on Smashwords!

And number five: The same can be said for Nightscape Press: 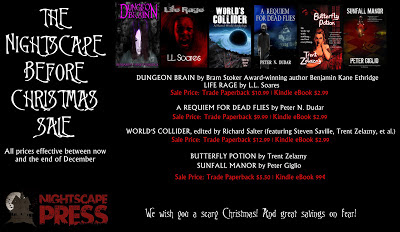 Some of you may not know this but for many years before I wrote fiction I was (and I guess still am) a musician. I sang, played guitar, bass, keyboards, piano since I was about 12 years old. Between 2001 and 2003 I recorded about 20 industrial rock/metal songs with a 233MHZ Compaq desktop computer, a Shure SM57 microphone, and a crappy Creative Labs sound card and somehow managed to end up with a fairly listenable 17 track album titled 10 Million Ways to Say Goodbye. I released it myself online to a handful of friends. Without a backup band to help promote it, it didn't really get the attention I felt it deserved. But such is life.

Years later I recorded some acoustic songs that had a totally different vibe, then I started experimenting with some acoustic versions of the Escape From Saturn songs and realized what I was working on was different enough from EFS to warrant a new title. Hence LiberatedServant. I recorded several demo songs and had planned to compile them together as a short EP called River's Rising and never ended up getting around to it.

Cue this past year, I'm going through old files and find some of my music tracks, videos, etc. and I decided maybe it was time to give both albums a better shot. So, I recompiled 10 Million Ways to Say Goodbye, remixed the tracks for River's Rising and put them up on Amazon. They're now both available in CD format and will soon be available in MP3 format on Amazon! You can listen to them below. Anyway, Happy Holidays and all that jazz! Until next time.


Posted by robertswilson at 7:59 PM No comments: