The Next Big Thing

Two awesome writers, Stephen Bacon and Brad Hodson, have tagged me to do this new-fangled Next Big Thing post. So here's my post participating in this big literature extravaganza. Also be sure and check out both Stephen and Brad's posts and their work in general. Both are absolutely fantastic writers. Anyway, let's get started, shall we? 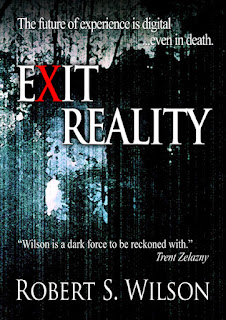 1) What is the working title of your next book?
Exit Reality: A Ray Garret/Lifeline Techno Thriller

But the overall story whether it started to evolve before or after that is much harder to pin down to one source. I've always been a big Christopher Walken fan. One of my favorite movies growing up that completely blew my mind was Brainstorm. Brainstorm was about these scientists who create a device which you could use to record and replay experiences through all of the human senses; sight, sound, touch, smell, and taste. So that movie was definitely a big part of the inspiration.

Another source of inspiration came from a documentary I watched that I don't recall the title of. It discussed, among other topics, Ray Kurzweil's controversial concept of the "coming singularity" between man and technology. The idea that before long you won't be able to differentiate between human beings and computers as they become more and more dependent on each other.

And then I thought: what if there was a device that people could use to record or playback experiences? Would they really just be used for that purpose in this day and age? No way. We've got social networking like Facebook and, even more inspirational to my story, Second Life and Youtube. Imagine recording the experience of skydiving--the sight of it, the thrill of it, the rush of air against your body--and then going home and posting that experience as a computer file on the internet for others to experience as well without even having to leave the comfort of their own home. A network where people could share real and artificial experiences: Lifeshare. What would a network like that be like?

I'll tell you what it would be like: Big fucking trouble, that's what. And of course then you put that idea into the mind of a horror writer and it's like a veritable playground of possibilities. So the first thing to be a concern in a world where almost everyone's brain is literally connected to their computers was murder. Really crime in general. So along comes Ray Garret, a jaded Antivii agent whose wife is recently deceased. A man who has nothing else to live for but the job of finding killers who exploit the Lifeline looking for innocent victims.

3) What genre does your book fall under?
Well, that's a tough one. Most of my work tows the shadowy line between horror and science fiction. That's definitely true of this book, but it's ultimate premise is based in crime fiction. Several people who have read it call it Cyber Punk. Personally I've not read much Cyber Punk, so maybe that fits too.

4) What actors would you choose to play the part of your characters in a movie rendition?
Ray Garret I'm gonna say maybe Nestor Carbonell and of course Christopher Walken to play the antagonist Roger Benigan.

5) What is the one-sentence synopsis of your book?
The future of experience is digital... even in death

6) Will your book be self-published or represented by an agency?
I'm very proud to say that Blood Bound Books will be publishing Exit Reality in early 2013

7) How long did it take you to write the first draft of the manuscript?
Well... two years if you only count the writing. Five if you count research and story development. I was researching and developing the idea for this story for three years before I even started writing.

What other books would you compare this story to within your genre?
Hmm that's a tough one. Some of the biggest inspiration on my writing and particularly on this story has come from two particular writers; Philip K. Dick and Peter Watts. But I don't know that I would compare it to their work. I have been told that it's very comparable to the work of William Gibson who I've actually not had the pleasure to read yet.

9) Who or what inspired you to write this book?
If any one person inspired this book more than any other it would probably have to be Ray Kurzweil. His ideas about the future of technology are very amazing. Yet at the same time some of his ideas concern me on a moral level. Something the story line of Exit Reality only begins to scratch the surface of. Another story of mine that's currently out to an editor for consideration touches on one of these concerning ideas much more head on in short story form.

10) What else about the book might pique the reader's interest?
How about the following blurbs?

“As visionary as William Gibson's Johnny Mnemonic and as seedy as Raymond Chandler's Philip Marlowe stories, Robert S. Wilson's Exit Reality is a supreme achievement. Wilson has created a world so plausible, and yet so full of nightmares, that you might never want to get online again. I loved this book. Write faster, Mr. Wilson, because I want more!”
—Joe McKinney, Bram Stoker Award-winning author of Flesh Eaters and Mutated

“Do yourself a favor and pick up a copy of Robert S. Wilson's fast-paced novella, EXIT REALITY. The story is compelling and well-written, the author deftly negotiating the line between SF and Horror—a difficult sub-genre that only the best writers can manage. Recommended without reservation.”
—Gene O’Neill, Bram Stoker Award-winning author of THE BURDEN OF INDIGO and OPERATION RHINOCEROS HORNBILL

“Kiss the world you know goodbye and get ready for Robert S. Wilson's terrifying sci-fi novella, Exit Reality. With powerful storytelling and fast-paced action, Wilson's ready to entertain and move you in equal measure.”
—Peter Giglio, author of Beyond Anon and co-author of The Dark

“Exit Reality is a fast-paced blend of sci-fi horror. Robert S. Wilson has created a believable near-future and populated it with all-too real characters. The nightmarish spiral of Ray Garret's descent is thrilling and unforgettable, and the technology feels just one step away. The narrative thrums with loss and desire. Wilson's muscular writing grips you tightly and pulls you along. Escape is futile. This will be one ride you won't forget.” —Stephen Bacon, author of Peel Back the Sky
Posted by robertswilson at 4:00 AM No comments: