Blood Type: An Anthology of Vampire SF on the Cutting Edge 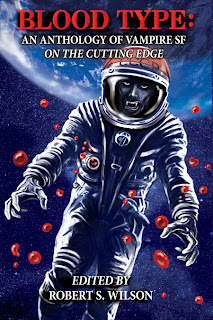 Buy the Kindle edition at Amazon.com!

It is not just an anthology of hard science fiction, however. This book also contains examples of science fantasy as well as some classic vampire stories including an updated reprint from William F. Nolan as well.

I initially set out to show the cutting edge of the genre, and I do believe many of the stories I've selected for Blood Type do in fact demonstrate this, but my vision changed somewhat during the selection process. I saw the chance to show the evolution of the vampire story and the vampire itself. I welcome the reader to be the judge as to whether I've accomplished this.

All net proceeds from sales of this anthology will go to The Cystic Fibrosis Trust.

In the time since my fiction has been on the market, I've found a lot of friends online. One of these friends has a daughter with Cystic Fibrosis. This friend has been one of the biggest supporters of my fiction and I would like to repay her by giving to the very foundation that is helping her daughter in so many great ways: The Cystic Fibrosis Trust, a UK-based charity that assists those suffering with CF.

Here's more about The Cystic Fibrosis Trust from their website:

"Since it was established in 1964, the Cystic Fibrosis Trust has actively supported excellence in research and clinical care, as well as providing practical support and advice to people with Cystic Fibrosis and their families. We are the only UK-wide charity focusing solely on CF.
We believe that everybody living with CF deserves the best possible quality of life with access to the best quality care and with a real hope for a better future. We will support them and their families to make this happen.
To do this, we fund high quality research to understand CF better and to develop new and better treatments, we set standards of CF care and review services to make sure they are meeting those standards, and we provide information and advice to people with CF and their families."

New comments are not allowed.