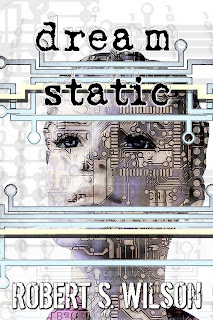 My newest novella DREAM STATIC is now available for Kindle and in bound together dead tree slices! This one is sort of a sci-fi, noir, romance mashup, a bit of a departure from my typical in several ways and clocks in at about 24,000 words. Here's the cover copy:

When successful environmental prosecutor, Angela Bane, goes in for her annual synaptic backup, she's just as reluctant as always. After all it's just a routine procedure. Until she wakes up twenty-two years later in a chaotic surgery room, disoriented and unable to speak.

As she slowly recovers from the Resus operation and learns about her fate, she struggles to deal with a world that's gone on without her. Her father's dead, her fiance, Jordan, has become an old man in her "absence," and her body hasn't aged at all since the day it was littered with bullets.

With no memory of her murder and no bearings in this place and time, Angela begins both physical and emotional therapy to try and adjust. Unable to deal with the chasm of time that's opened up between them, she sends Jordan away determined to suffer in solitude.

Then the dreams begin. A dark parking garage, a close colleague, and the obscured face of a man lifting his gun and pointing it in their direction. Could she actually be remembering something that happened after her backup?

"It's called Dream Static. Sometimes the old brain tissue still retains bits of memories and, upon reanimation, those synapses can connect and reincorporate with the ones that were backed up."

Before long, someone comes to visit her in the hospital. A dark brooding presence, Maddox was the original detective assigned to her murder. And now that she's alive, maybe, just maybe she holds the key to bringing the man responsible to justice.

And in the end the killer might just find her… 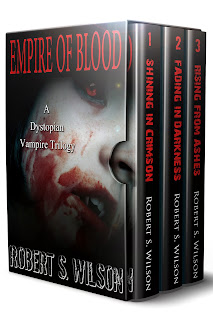 Now, for those of you who are down on your luck financially who still want to read this one, I'm actually giving away e-copies in exchange for honest reviews, so if you're interested, simply sign up for my new review copies newsletter here! All I ask in return is that you review the book on Amazon. If you also like to do blog reviews or video reviews, or Goodreads reviews, or elaborate sky-written reviews, or have a review site, even better!

I suppose I should also mention that I finally released a Kindle boxset edition of the EMPIRE OF BLOOD series. It includes the trilogy as well as the following two short stories: WHAT HAPPENS IN VEGAS and THE RESURRECTION OF TOMMY DERRINGER. Now, with the entire series up and looking rather naked on the review end of things... it would mean more than the world to me if any of you out there who have read the series would click the link and head over to the Amazon page and leave a review.

In other news... I just finished the second draft of a new sci-fi novella called The Colors, one I've been working at off and on for about three years now. One I'm very proud of and think might mark a big milestone for my work. Or it might just suck and be the spark that ignites my eventual meltdown. Haha! Hopefully not. I don't really want to give too much away but it is a hard SF novella with some similar and polar opposite parallels to Lovecraft's The Colour Out of Space (a connection that happened quite by accident much like my story FOUR ARCHES recently released in GOTHIC LOVECRAFT edited by Lynne Jamneck and S.T. Joshi).

At the beginning of May however, I'll be doubling down on finishing up ORIGIN OF BLOOD: An Empire of Blood Collection  in order to make sure and have it ready in time for a Christmas day release. The collection will include three character origin novellas, some other origin short stories, as well as some notes, handwritten and otherwise, deleted scenes, and other bonus material.

I have two stand alone novels that I'm itching to get back to, MindCore: A Lifeline Binary to finish and I've been developing ideas for the yet to be officially named predecessor/spinoff trilogy to EMPIRE OF BLOOD. I don't want to give away anything just yet but a lot of interesting ideas are churning.

Well, with that, I'm done boring the pants off of you guys. Until next time...
Posted by robertswilson at 6:21 AM