This is the first piece of a larger puzzle I intend to put together on the craft of writing. I do not intend, by writing this, to try and pronounce myself as an expert by any means. What I do intend to accomplish with these little posts is something helpful for writers in all stages of the game. This particular piece is more for the new writer. Many writers often feel very insecure when they first begin to seek out the wheels and cogs that come together to make good writing. And often they have no idea where to look for answers. This is my attempt to help some of them out. The following are some of the most basic elements of what makes a good fictional story. I would be stupid to assume I’ve covered them all. But hopefully I’ve covered the most important to start with. Feel free to comment if you feel I’ve left any out.

2. Due to the complexity and nature of subjectivity to the craft, many great writers refuse to publicly pass on what they have learned while many other writers tackle the subject either prematurely or from very particular subjective points of view. To be clear: I would go as far as to say that there is no book on earth that can teach you, from point A to Z, exactly how to write well. Many books will give you hints and clues, and many authors will tell you what works for them, but no two writers are exactly the same and neither will their methods be. That’s not to say there aren’t good teachers or good books out there. There are, but no one can learn to write well by merely reading or learning about it. It takes an interactive approach that combines learning and doing.

3. Which brings us to number three. Learning to write well is a huge commitment that requires a great amount of determination and willingness to experiment as well as an insatiable thirst for reading and writing. Many people who decide one day, “Hey, I want to be a writer,” will never have enough determination to make the kind of commitment to the craft that is required.

Although that can happen for many reasons (i.e. sometimes it’s just not what the reader is in the mood for, or this particular reader inherently doesn’t like some element of the story and never will, or the book just isn’t interesting enough in general), having a hook at the beginning of your book certainly can’t hurt. For short stories I would say a first sentence hook is damn near necessary. A hook is accomplished in many ways. Many people insist on starting with action or in the middle of an intense situation that started prior to the beginning of the story. This can work if it’s not done just for its own sake. But to say it’s the only way to create a hook is ridiculous. Hooks can be created with action, mystery, intrigue, odd sentences that don’t fully make sense without reading further, great dialogue, or countless other ways. It all comes down to imagination. A hook at its most basic explanation is a line or more that makes the reader want to read more. The possibilities for how to execute such a thing are endless.

1. Relatable characters the reader can identify with and therefore empathize with. When you read about a character, like meeting people in real life, you instantly look for traits and features about them that are similar and different to your own. And many of us have a number of traits that we feel highly about almost unanimously in society. For instance, many of us especially think highly of someone who is kind or helpful to others. Heroes, for example. People who sacrifice their time or what’s important to them for others. Those who are smart, attractive, funny, do good deeds, etc. And these are wonderful traits to use but combining too many of them can be overkill. And at the same time, believability is even more important. If you relate to a character but you don’t find them believable, what’s the good in that? Will you bother to keep reading about them? Probably not. And what’s the most believable thing that people have, that everyone has, that anyone can relate to? Some kind of flaw or flaws. Everyone has them. Some of them are endearing. Some… not so much. Many, however, are very relatable to others. So a balance is necessary. Good, believable, relatable characters have good and bad traits.

2. Rules. Unless you’re writing bizarro fiction, rules are very important. With real world fiction like literary or any other kind of non-speculative fiction, the rules are already obvious. The rules of physics, the rules of common sense, and every day life are the rules that your story will need to follow in order to be believable. As for speculative fiction like fantasy, science fiction, or horror, the rules are what you make them. But they have to be created and once they’re created and established, they have to be followed in order to be able to keep your situations believable. Any time you sit down to read fiction you have to do what’s called “suspending disbelief.” When you suspend disbelief you tell yourself, “What I’m reading right now is fiction and I know that but I’m going to believe it on some level as I read so I can enjoy this story.” But once the reader makes this decision, which we all subconsciously make every time we open a book of fiction, it’s no longer their responsibility to keep suspending disbelief. It is the writer’s. When a reader stops reading because they don’t find the story believable enough it is usually because the writer has done something to distract them or to remind them that they are, in fact, reading. One of the biggest causes of this is when a writer breaks the rules of their story. Another that’s probably far more responsible is poor writing and/or writing that points out something that takes away from what I like to call “immersion.” Suffice it to say that immersion is that feeling of reading and being fully immersed in the fictional world you are reading about. I’ll talk more about immersion in a later post.

3. Great dialogue. Great dialogue is a sort of balance. Each character has to have their own style of talking. Some similar, but there still has to be some variation. If all your characters talk exactly the same your dialogue will be dry and unbelievable for sure. And always following the rules of grammar too strictly will also make your dialogue much too stiff. If one particular character talks that way, then that makes sense. It can tell you a lot about them, but it’s something that should be unique to that character or a small number of characters per story. Yet, at the same time, making your dialogue too much like conversation and droning on and on about daily things can end up boring the reader. So the trick is to find the right balance between how people really talk and what’s important to the story. It’s not an easy balance to learn. And it can be different due to style. No one can really teach it fully to another person by explaining it. Great dialogue can be learned by listening to how people talk, reading the work of great writers, practicing continuously by writing your own dialogue often, learning to understand what’s important to each story as you write it, and developing your own style.

1.      Resonance. Resonance is that feeling like déjà vu you get when you finish a story. That feeling like all the pieces fit together or at least some particularly profound pieces did. This technique is almost always great. But it requires the story to have a sort of theme and/or parallel or contrasting element established early on. Resonance is probably one of the hardest rabbits to pull out of a writer’s bag of tricks. It is so ingrained in the story itself that to explain its inner workings would require examples and many more words than this entire blog post. Suffice it to say, resonance is not usually accomplished in a first draft. It typically requires a lot of analysis of the story as a whole and part by part—what Stephen King calls “Seeing the forest for the trees”—combined with anywhere from light to heavy revision to achieve the full effect successfully.

2.      Change. The most obvious thing about plot is that it should bring about change in the end. This can be a change in the main character, changes in all the characters, their setting, or any number of possibilities. It is almost always necessary in any good story for someone or something important to be completely and utterly changed in some form by the end of the tale.

3.      Emotional impact. Emotional impact is not always necessary, but when it is and it’s handled well, it can leave a reader in tears and eagerly awaiting your next work of fiction. Many readers know what I’m talking about here. When a book or story makes you cry, it’s a good bet you won’t soon (if ever) forget it. And the best thing you can accomplish as a writer is leaving a profound impression on your reader. Emotional impact can also be brought about with resonance. Some would say the two are the same, but I would argue that either one can be achieved without the other and therefore are not mutually exclusive. 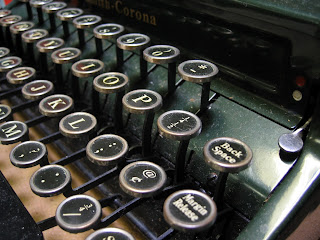 I hope you enjoyed this post. It was in no way meant to be an exhaustive list, however, more of a simple beginner’s list for those who would seek it. I know that, for me, when I first started taking my writing seriously I would have benefited greatly by finding a post like this to explain some of the more basic elements. And I also won’t pretend for one second that this is a full clear explanation of all of these elements. As I said before. I don’t think anyone has or ever will. I do hope, though, that I’ve accomplished something helpful that might allow some writers to move forward in their journey. So, by all means, feel free to add to my list or argue with it by commenting or sending me an email at shiningincrimson@gmail.com That’s it for this first edition of The Subtle Balance. Click here to read the next installment: The Subtle Balance Blog Series: Part 2 Point of View... Well, Some of it at Least.
Posted by robertswilson at 3:09 PM

Email ThisBlogThis!Share to TwitterShare to FacebookShare to Pinterest
Labels: The Subtle Balance