Introducing: The Special Edition of Shining in Crimson: Empire of Blood Book One 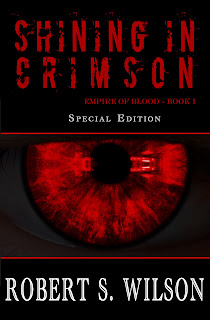 This brilliant, majestic cover was created by CL Stegall of Dark Red Press as a test drive for a new custom book cover service Dark Red Press will be unleashing at some point in the future. I couldn't be more happy with it! It's based on one of several cover concepts I've had in my head but am unable to pull off myself as I'm no real artist.

I had been planning to make a special edition already when CL came to me and asked if I would be interested in him designing a cover for Shining in Crimson. Of course, having seen his work, I was ecstatic at what he was offering me. Now, as ridiculously awesome as the cover is, a cover alone can't make a special edition on its own. You also need content. Interesting content. Well, how about two new Empire of Blood stories, one of which will be exclusive to the special edition? How about cut scenes from Shining in Crimson? And for those who have been waiting... How about a sneak peek at Book Two?

Yes, I'll be putting in several select rough scenes from Book Two as well. All of you who have been complaining that you want to know what happens next will get a taste of just that. But I'll warn you: be careful what you ask for.

Now, in the past when I have set dates, the universe has taken it upon itself to bend over backwards in order to disrupt them. So, I'm just going to say this... It's coming soon! Hopefully within the next month, but I'll make no promises as the universe just might be listening.

Speaking of special things, I have added a new page to the blog titled Specialty Items. It lists several items I have for sale that are deeply intimate and personal items related to my work. All of which are priced at a sliding scale. And once they're gone, they're gone, I won't be selling them again as they are each one of a kind.
Posted by robertswilson at 7:00 AM