Anthologies and ORIGIN OF BLOOD, a new Empire of Blood collection!

Holy shit, this blog is covered in dust... I walk away for one little—okay, more like several months, and you'd think I was dead. But I'm not. I'm still here... I've just been so busy with everything else that posting on my blog seemed like something that could wait. But alas the need to update those few of you who arguably enjoy (or at least tolerate) reading my occasional blog-like blabbering has brought me here yet again. So... What all's going on? Ha! What isn't, I ask you? What isn't!

Anthologies! Anthologies are going on... Three of them to be exact--no, wait, FOUR! Technically even FIVE! Three of which I've managed to slither a story of mine into, and two of which I've taken part in editing. One I've edited all by myself and the other I edited alongside my lovely wife Jennifer Wilson and the infamous Mark C. Scioneaux... So, without further ado, here they are: 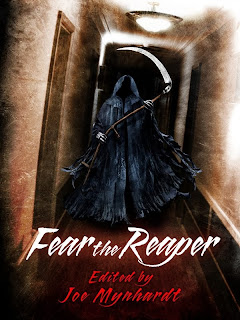 One day I was sitting around thinking about that old saying about walking out in the rain, “You’ll catch your death.” And I’m a big fan of taking phrases literally or twisting their meaning in some other way, so I visualized someone actually “catching” a death.

What I saw in my mind’s eye was a big ball of light—a spirit—falling down into a deep canyon ending in a black abyss. And I thought, what if there were people out there who were gifted with the ability to dive down there and catch your spirit and therefore “catch your death” and bring you back to life? And as soon as I wrote that first line, “I caught my first death when I was only sixteen,” the rest of the story just came to me. And of course I had no choice but to eventually take one of my characters beyond that deep black abyss itself.
What is fiction if we can’t have a little fun—if we can’t explore a little with it from time to time?

I'm particularly proud of this story. If I had to describe or label it, I would say it's in the vein of cosmic horror. If you get a chance to read it, please do let me know what you thought. 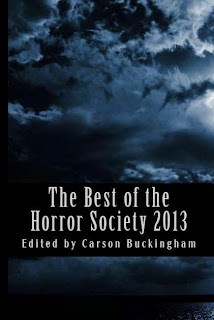 The Boy in the Elevator started as a waking dream I had. In it, there was a far-too-quickly descending elevator and inside something very dark and horrible was happening. When I woke up, I immediately started writing this story. It's a story about the secrets people keep, the sins they commit, and a horrific case of supernatural justice. I do hope you'll check it out some time. 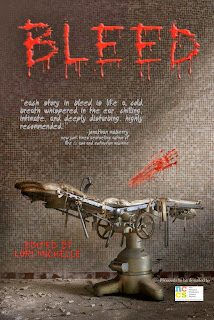 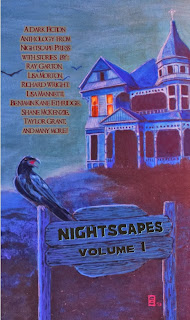 From the depths of the soul to the depths of hell. From the shadows of your most frightening dreams to the shadows lurking in the corner unseen and waiting. Darkness is painted across the palette of every nightscape.

And it’s waiting for you… 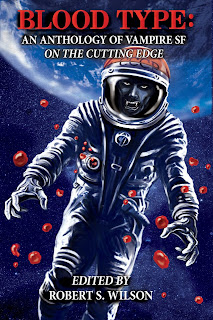 And finally, just released on Devil's Night, October 30th is the Kindle edition of Blood Type: An Anthology of Vampire SF on the Cutting Edge edited by myself. Blood Type will contribute all net proceeds to The Cystic Fibrosis Trust and will include stories by Peter Watts, Mike Resnick, Laird Barron, Stephen Graham Jones, William F. Nolan, Tim Waggoner, Benjamin Kane Ethridge, Michael R. Collings, Jason V Brock, John Palisano, Jonathan Templar, Taylor Grant, and many more including some rather interesting newcomers like Jason Duke and Essel Pratt. The paperback edition will be out soon.

It is not just an anthology of hard science fiction, however. This book also contains examples of science fantasy as well as some classic vampire stories including an updated reprint from William F. Nolan.

I'm very excited for this book to finally come out! Weighing in at just over 130,000 words, I believe it includes some of the best fiction I've had the good fortune of editing and I'm so excited to finally share its dark and truly unique contents with you all.

So, there's the anthologies that are out. What else could I possibly have going on, you ask? Well... you may recall the recent Indiegogo fundraiser I held for RISING FROM ASHES: EMPIRE OF BLOOD BOOK THREE. Well, even though I did not manage to fully fund it, I'm still working my ass off toward putting out the third part of my Empire of Blood trilogy early in 2014.

Along with that, one of the perks I offered late in the fundraiser was for a collection of novellas I have planned out called ORIGIN OF BLOOD. Each of these three novellas will touch on a different character in the Empire of Blood world, giving you an origin story of how they came to be who they are. They include THE RISE OF CAESAR, ISHAN THE ANCIENT, and QUEEN OF THE DEAD. I had initially chosen to release each novella individually and collected together and release them  in four separate signed limited hardcover editions ONLY. And for the most part I still intend to do this. But to start with I'll only be releasing the collection. If there is a demand for the individual novellas I will do them too. But let me repeat something here. THESE WILL NOT BE AVAILABLE IN ANY OTHER FORMAT EVER! 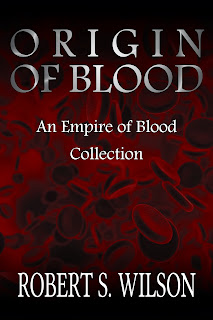 This collection will include all three novellas, a short story or two, some handwritten notes, illustrations, other notes and background information, and each will be signed and numbered. As of right now, two of these have been purchased via the Indiegogo campaign. Due to the fact that I may not do the individual editions at all except for special proof editions for Indiegogo contributors, I'm going to do this run on a sliding scale between 100 and 200 copies depending on how many are pre-ordered. Release will be mid to late 2014. But for those who pre-order, I will be including an early e-copy of RISING FROM ASHES: EMPIRE OF BLOOD BOOK THREE before it is available elsewhere, a secret gift, and samples and updates from time to time about ORIGIN OF BLOOD and RISING FROM ASHES during the writing process for both.

That said, ORIGIN OF BLOOD: AN EMPIRE OF BLOOD COLLECTION is available for pre-order NOW! CLICK THE COVER OR CLICK HERE TO PRE-ORDER YOUR COPY AT 40% OFF!
Posted by robertswilson at 4:15 PM