In my absence of posting here, G.R. Yeates has offered to take the reigns for a day. I first became properly acquainted with Yeates's writing through working on Horror for Good. The story he sent to us, The Lift, was a very visual and grotesquely poetic tale that took the boring drone of working in an office building and gave it a horrific twist that would make the average desk job seem like a vacation on a tropical island. Yeates is an amazing new voice in horror to keep an eye on.

The Cliffs of Gallipoli: a War fought on Many Fronts 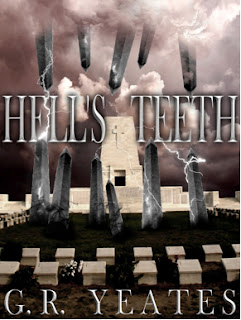 It is strange coming to the end of a book and it is even stranger coming to the end of a trilogy. I have been living with The Vetala Cycle; its characters, situations and, of course, its vampires - the Vetala - for almost six years now. It's kind of scary to think that I am now about to bring this cycle, metaphorically and literally, to an end. It has also made me reflect on why I started writing about World War One in the first place and what I hoped to achieve.
I was first introduced to World War One back in high school with the poem Dulce et Decorum est by Wilfred Owen - my fascination with the period and the conflict grew from there. With this fascination though also came an awareness that the war stretched far beyond the popular perception of Captain Blackadder and Baldrick in their trench on the Western Front. As well as there being the Eastern Front pushing into soon-to-be Soviet Russia, there was the African Front which has rarely been portrayed except on odd occasions such as the film, The African Queen, starring Humphrey Bogart. This was something I wanted to address in some respects with my series of novels, which is why I chose the cliffs of Gallipoli as the setting for Hell's Teeth. Gallipoli was a doomed campaign that saw the Entente routed by the Turkish army - it ended in retreat and outright defeat. Even on the Western Front, both sides dug in and massacred their way through years of stalemate. Not so at Gallipoli.
It was also a campaign fought by soldiers drawn from places such as Australia, New Zealand and Canada - not all of whom feature in Hell's Teeth but nevertheless I would like to think that I have been able to highlight these people fought and died in what was essentially a European war in terms of the politics that drove the conflict on. Those who died at Gallipoli often did so thousands of miles from home with their bodies left to rot in the sun without proper burial. Gallipoli was a complete disaster and became something of a forgotten Front subsequently. It felt fitting to close a series of novels that explore the horrors of World War One - real and imaginary - in such a setting and I hope that in all of the books I have done justice to the time period and the people who are no longer with us as much as to the genre I write in and the audience I write for. Bio:
G.R. Yeates has been published in the DarkContinents anthology, Phobophobia, and has been accepted into the Horrorfor Good anthology coming soon from Cutting Block Press. He is the author of the critically-acclaimed Vetala Cycle, a trilogy of vampiric horror novels set in World War I. The first two volumes, The Eyes of the Dead and Shapes in the Mist, are available now with the third and final installment, Hell’s Teeth, coming in March this year. Expect more, much more, from this writer in 2012.
Check out G.R. Yeates online at http://www.gryeates.co.uk
On Twitter at http://www.twitter.com/_gryeates_
And on Facebook at http://www.facebook.com/gryeates666
Here are some links to his currently available books from the Vetala Cycle for the US and the UK:
THE EYES OF THE DEAD
http://www.amazon.com/dp/B0052BPGTM
http://www.amazon.co.uk/dp/B0052BPGTM
SHAPES IN THE MIST
http://www.amazon.com/dp/B005IE7VX2
Posted by robertswilson at 5:19 PM